Obtain what *should* be obtained 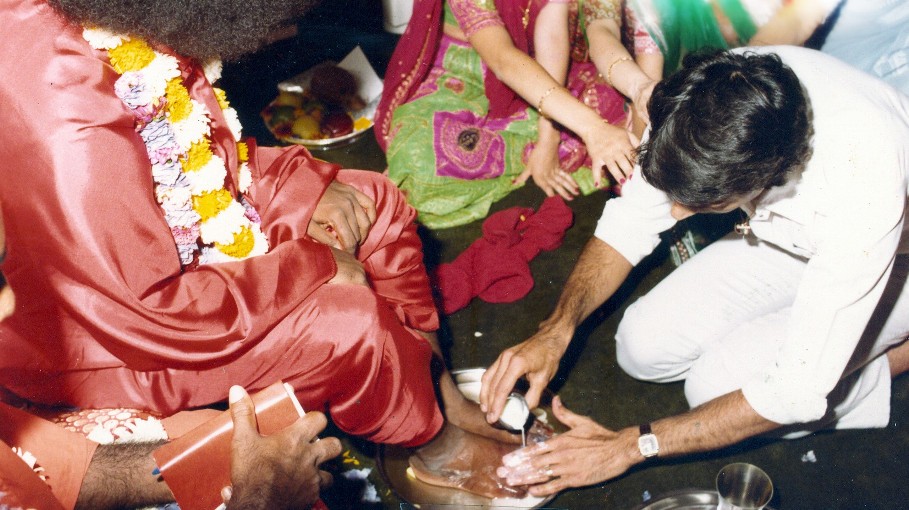 All this time we have been singing bhajans. We are tired, sleepy, our bodies are aching and some of us don’t even have a proper place to stand. Still, I was thinking, “What should I talk to you about?” We can always speak of the Divine, at any time, anywhere and in any situation. When we do so, tiredness becomes meaningless, because by praising and singing the omnipotent God’s name, through his grace, we can rid ourselves of problems, difficulties and illnesses. You don’t need a specific time for this; you can think of God at any time. When we think about God and seek his grace while chanting or singing his name, then his grace will enter our hearts and cleanse them of impurities. Such is the purifying power of God! You can chant and worship the divine name in any form – you can say Muruga, Krishna, Shiva, Vinayaga or Devi… Whichever form you choose to worship, God is present in all the forms as Shiva-Shakti – he is one, with one significance.

This single grace which we, as humans, are unable to understand, will enter in us and help us to realize ourselves.  This divine name is such a powerful and grace-filled medicine that, if we start by chanting or singing it vocally, then our minds, too, will become involved; we will begin to really think about the Divine and this reflection will us bring peace of mind. Singing God’s name is never a waste of time.

From the time you wake up in the morning until the day is finished, you keep yourself to a very strict time schedule. This is the nature of life in the UK, isn’t it? We keep ourselves on a tight leash by always looking at the time…time, time, time. They wanted me to behave in this same way, but I won’t allow myself to get stressed like that! From the moment I arrived they have made me follow a very tight and full programme schedule, without allowing me even the slightest bit of leeway, but I don’t worry about it.

It must be about midnight now, but it doesn’t seem like that to me. Do I look tired to you? No. At one place we had bhajans, at the next we also had bhajans and at still another there was a huge crowd. After finishing all that I came here, and now you all are here, but that doesn’t matter. Dr. S said that you all want to talk to me before I leave on the plane tomorrow morning at 10 AM. I know that all of you came here with different ideas in your minds. Some of you were thinking, “We don’t know when Swamiji might ever come around here again, so let’s go to meet him today.” Whatever it is you may be thinking, actually it is not necessary for me to come here. God is within you. You should not forget that. This body [of mine] is an illusion; today it is here and tomorrow it may die. Spirituality does not rely on this body, for which life and death are both temporary; you must rely on God.

We should never forget the name of such a powerful God…think about it, chant it and sing it. All religions are one, so we can think of him in any form. This is what Hinduism says; Hinduism will accept any person from any religion because it sees all religions as one.  It will embrace all religions like a mother embraces her child. It is as vast as the ocean into which any number of rivers can flow and be accepted into its waters. Hinduism will not criticize other religions. It was there from before the agricultural age. Many people have asked me, “How can you say this? How can this religion have existed before the agricultural age? How are we to believe this?” I told them that it’s very simple. In which religion [existing today] do they say “Agni Deviye Namaha” [I bow down to the Fire God]? This is said in our Hindu religion, because in those ancient times people witnessed fire sparks emanating from the friction of trees rubbing against each other in the wind. This is said in the Vedas and even modern science confirms this.

Therefore, first they worshipped fire; then they worshipped water that sprang up from the soil and flowed over the earth, by chanting Ganga Deviye Namaha. Next they worshipped the stones and soil chanting Bhoomi Deviye Namaha. The only religion [today] that still worships these natural elements is the Hindu religion, which is why I say it existed even before the agricultural age. When we look back through the generations, we cannot even find out when exactly it started – this is not what I am saying, this is what the Vedas say.  I am only repeating what the devotees, sages, devas, enlightened people and great souls have said.

Hinduism is a deeply meaningful religion.  But these days, in some people’s hands, it has been turned into one that exhibits some madness. We don’t want this madness; we don’t want dirt soiling our minds. Our religion is meaningful and we who worship the Divine in this way have no need for ego, selfishness, jealousy or competitiveness. Why would we need anything so worthless? These meaningless characteristics and qualities arise because you think of yourself, your background, your position, your ideas and aims, as being very important. In such people the ego is nurtured and grows, and this I-ness will ultimately destroy them.

Ego has the power to destroy you. In the Vedas there are many stories written about what happened to Vishvamitra and why. He was a tremendously powerful sage but because of ego he experienced so many troubles and difficulties. And what did Pusala Nanayanar do? He built a temple in his heart and installed God there. Is this difficult? What we are doing is building temples on the outside – and so we should; I am not saying this is wrong. However, there have been so many fights fought over the building of temples. People form an association but there won’t be anything more to it than that, there won’t be any unity amongst the people of that association and they will quarrel over which temple to build. Finally one will say, “I’ll build a Muruga temple; you build a Vinayagar temple!” The other will say, “You build a Krishna temple; I’ll build a Rama temple.” All temples are one! You are building temples for God, so why do you want to become God yourself? We are all devotees, beings created by God. If we are to do anything, then we need devotion in order to accomplish it.

There is a difference between the concepts “I am doing” and “God is doing through me.” If you are building a temple, and say, “I am building a temple; come and help,” then the “I” here means the ego is in play. However, if you say, “God is using me to realize this construction; let’s all do this together,” then your mindset is one of surrender at the feet of God. There will be no “I”. Rather, you will think that everything is being done by him. And who does not dance to the tune of the dance master? God is the only one who has the power to make things happen. (…)

This Divinity has bestowed me his divine grace and I have thought of how to use it. The God who runs the entire world is the one who makes me work – by guiding me, blessing me and giving me his light of wisdom. Let his name spread all over the world! Let everyone attain the truth and his blessings! By doing so their karmas will be dissolved, their problems and difficulties will be solved, their sicknesses cured and they will attain the feet of God. This is my wish.

Oh God, there is no need for name, fame or wealth – these are only related to the material world. As for me – I saw your name, I understood it and realized it. According to the saying, “Let the whole world experience the bliss that I have experienced,” I know that there is a way for everyone to attain this bliss, but no one ever asks me to show them the path that leads to the seeing of God. They only talk to me about their troubles and problems and I will also listen to them. Whatever it is you wish to attain through me, that will happen.

Obtain what should be obtained!