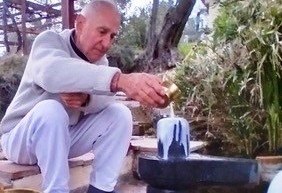 A few months ago we had a big fire here in the Centre of Unity that destroyed an important part of the ancient olive grove. Thankfully, the firemen came immediately and the damage could be limited. We had thought that many of the centenary trees would be lost but now we’re relieved to see new leaves coming out on almost all of the burnt trees. Only two big trees were lost but now we can already see the green shoot of a new tree growing from their roots.

Last year we suffered such a severe water shortage that for the first time in a thousand years the spring completely dried up!  We prayed for Swamiji’s help and, thanks to his grace, now the spring is again giving plenty of water! Thank you Swamiji!

To celebrate Mahashivaratri we had invited two friends to join us in performing a beautiful abhishekam to the Shivalingam that was donated to the centre by Swamiji and which is placed in a small temple near the water spring. After the abhishekam we chanted Om Namah Shivaya 108 times. We then continued the celebration in our temple, where we sang bhajans and kirtans, did a meditation, received lingam blessings and had a satsang. There was a strong energy and both we and our friends felt the presence and blessing of Swamiji.