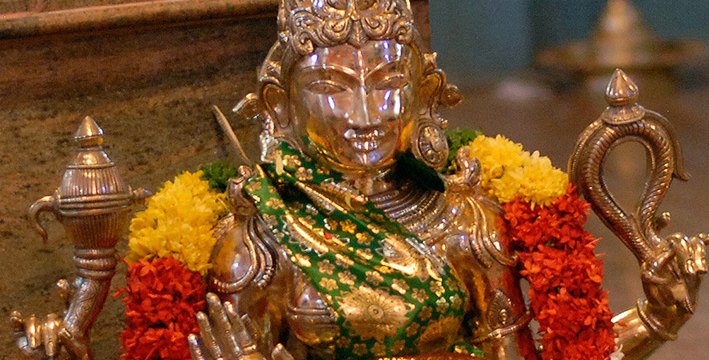 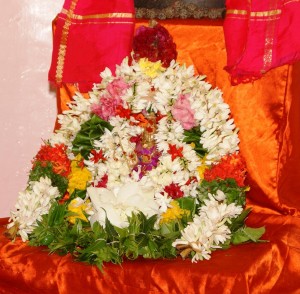 Goddess Bhuvaneshwari after the Maha-abhishekam during Navaratri 2014.

In Sri Premananda Ashram we perform an ancient ritual called abhishekam to the Goddess Bhuvaneshwari every night of the year. During Navaratri however, Her presence is even more powerful and everybody gathers in the puja hall each night to worship Her. Swamiji always talked about the original force in the universe, Adi Shakti. Bhuvaneshwari is often referred to as Adi Shakti. That essence of Adi Shakti is the original, that which came before name and form. Adi Shakti or Bhuvaneshwari is therefore the supreme spirit without form. She also takes a form as Parvati, the consort of Lord Shiva. Bhuvaneshwari is the formless energy or consort of the formless Shiva. All of the Sri Premananda Centres around the world also have a five metal statue of Goddess Bhuvaneshwari, which they perform regular abhishekams to. 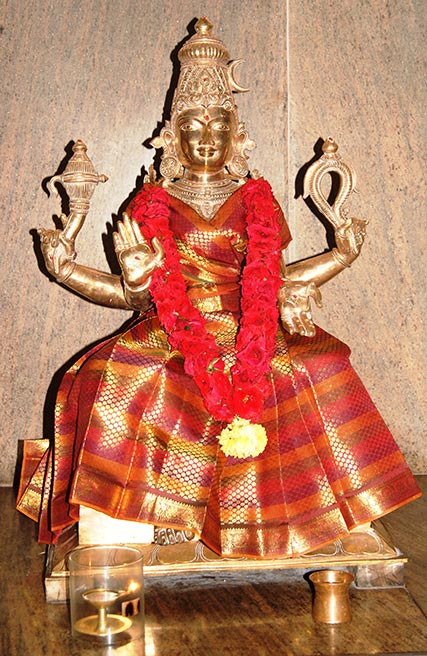 This statue of Bhuvaneshwari was installed in the Sri Premeshvarar Temple during Mahashivaratri 2014.

“Bhuvaneshwari is the Earth Goddess and we respect and worship this aspect of the Divine Mother in our Ashram. This is because we regard this Earth as the Divine Mother. Take her as an example. She is so kind, patient and tolerant to human beings. We do all kinds of nonsense on her beautiful body, this great Earth. She gives us all that we need to live. She never stops giving to us but we, in our foolishness, are selfish with all that she gives us. We don’t want to love our fellow beings, human or otherwise, like she does. We try to keep what she gives only for ourselves. Mother Earth regards all living beings as her children and her love for them is immense. The human race has persistently destroyed and perverted her dharma of love and compassion. Now Mother is warning us to take care not to destroy her. Nature and Divinity is the greatest example to you as a mother. Meditate on Mother Earth.”