What Happens To Your Letters? 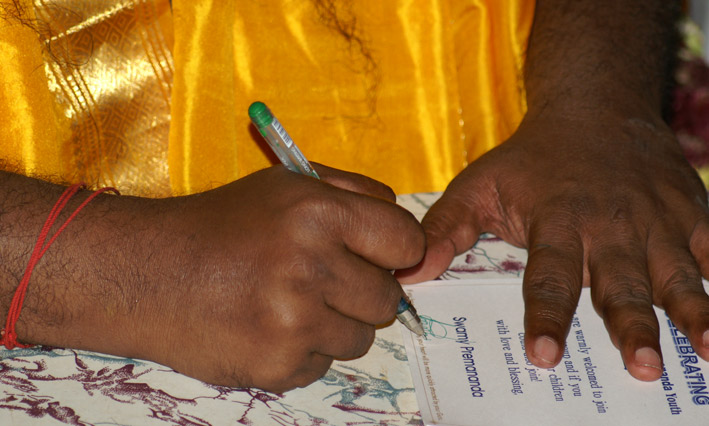 What happens to your letters when you write to Swamiji.

People from all over the world who had faith in Swamiji, including those who had never met him, contacted him through letters. They wrote for solutions to their problems, to cure their illnesses, get rid of bad habits and, above all, have peace of mind. That we could write to him and receive his personal reply, was indeed a rare opportunity and a great gift. There are also many people who wrote a letter to Swamiji, put it in front of his photo and got a solution to their problem. Swamiji said that whenever you write to him, at that very moment he knows it and he starts to take action. Countless people have experienced this and they are still doing so.

Whenever Swamiji received a letter he would feel as though that person was with him personally and he showed the same respect for the letters he received as he did for people who came to meet him. The people who wrote down his replies to the letters said that sometimes he would not allow them to read the letter out to him. Instead he would just hold the letter in his hand and immediately dictate the reply. Afterwards he would tell them to read the letter and see whether the reply was suitable for that letter. Every time they saw that his answer replied correctly according to the contents of the letter!

If you wish, you can continue to write letters to Swamiji. You can write them in any language. Now, after Swamiji’s mahasamadhi, when you write a letter to Swamiji and send it to Swami Premananda Ashram Management by post or by e-mail, we consider it as Swamiji’s personal correspondence. Your letter or e-mail is placed on Swamiji’s mahasamadhi for some time. Before he left his body, Swamiji said that a powerful lingam would be installed in the temple in the Ashram. In 2010 he said that it would be called “Kurai Teerkum Shiva”, which means “Lord Shiva who solves your problems.” This is now Swamiji’s mahasamadhi lingam. Once a month we put the yaga kundam in front of Swamiji’s mahasamadhi lingam and put all the letters inside. We sprinkle holy water from the lingam abhishekam on the letters. We then show the sacred flame to Sri Premeshvarar and also to the statue of Swamiji in worship. After this we burn the letters in the sacred fire.