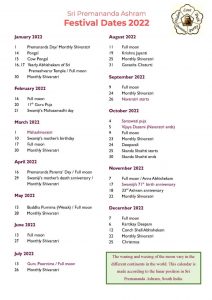 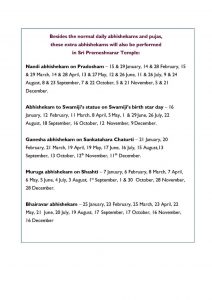 Explanation of the different events

Pradosham
Pradosham, an auspicious day dedicated to Lord Shiva, falls on the 13th day of the lunar fortnight, once during the waxing phase of the moon and once during the waning phase. At the Sri Premeshwarar temple on this day, an abhishekam is performed to Lord Shiva’s sacred bull, Nandi, followed by an evening abhishekam to Sri Premeshvarar, Swamiji’s Samadhi Lingam, in the evening.

Abhishekam to Swamiji
Once a month on Swamiji’s birth star day an abhishekam is performed to Swamiji’s five-metal statue in the temple in the evening.

Anna Abhishekam
Anna (food) Abhishekam is performed to ask the Divine to grant that we will always have plenty of food and enough to give to the poor. Cooked rice is offered and covers the Lingam, which is referred to as Anna Lingam. After the abhishekam, a free meal including the offered rice is distributed to all.

Premananda day
Some years ago Swamiji named the 1st January “Premananda Day”. He suggested that his devotees start the New Year with a service activity. We should start the year thinking of others and giving service. Start the year with Premananda, think of Premananda and give Prema and Ananda. Many devotees all over the world are following this call and are spending Premananda Day by doing something for their neighbours, those in need, etc.

Pongal
On Pongal day the Sun God, Surya, is worshipped at sunrise with the outdoor cooking of a large pot of rice from the recent harvest. When the dish overflows everyone around shouts “pongal-oh-pongal”. The cooking place is traditionally decorated with sugar cane, turmeric roots and colourful drawings with rice flour on the ground (“kolams”).

Swamiji’s mother’s birthday
Traditionally a saint’s mother is revered as she was chosen by Divinity to be the mother of a great saint and to give birth to him or her.We fondly remember Swamiji’s mother on her birthday. Since her death, we have been commemorating Ammama’s birthday as well as her death anniversary with a puja in her room and a special meal for the Ashram children.

Mahashivaratri
Mahashivaratri is the great night of Lord Shiva. Four abhishekams are done throughout the night to Sri Premeshwarar. Devotees fast and stay awake all night. The Panchakshara mantra Om Namah Shivaya is chanted for 24 hours without interruption. It is said that those who utter the name of Shiva during Shivaratri, with perfect devotion and concentration, are freed from all darkness and are liberated from the wheel of birth and death.

Buddha Poornima/Wesak (full moon)
Buddha Poornima celebrates the birth, life and enlightenment of Lord Buddha. In the Ashram we celebrate Wesak around the Bodhi tree, which was grown from a cutting of the original Bodhi tree in Bodhgaya under which Lord Buddha is said to have attained enlightenment more than 2,000 years ago. The tree is decorated with lamps, bhajans Buddhist mantras are chanted whilst devotees walk around the tree and offer water. Afterwards many like to meditate around the tree until late in the night.

Guru Poornima (full moon)
Guru Poornima is the day on which the Sadguru is worshipped. The Sadguru is the one who guides one on the correct path through the turmoils of life to the feet of God and raises the devotee’s mind from ego consciousness to Cosmic Consciousness. In the Ashram, Swamiji is worshipped throughout the day with chanting, meditation, service and abhishekams.

Krishna Jayanthi
Devotion or ‘bhakti’ is the only means of attaining Lord Krishna. Bhakti kindles love for the Lord. When love is directed towards Krishna, a person is freed from the bondage of the world. In the Ashram we celebrate Krishna Jayanthi with a Mahabishekam to Lord Krishna, special poojas, Krishna Bhajans and prasadam.

Ganesh Chaturthi
Lord Ganesha is the elephant-headed god who is worshipped first before starting any prayers and His names are repeated first before any work is begun. He is the Lord who removes all obstacles on the path of the spiritual aspirant and bestows on him worldly as well as spiritual success. Lord Ganesha is the embodiment of wisdom and knowledge and he is therefore most popular amongst children who pray to him for successful studies and exams. On this day we perform a Mahabhishekam to Lord Ganesha and we offer Him a vast choice of delicious prasadams which He is so fond of.

Navaratri
Navaratri is the ten-day festival dedicated to the Divine Mother. Devi, the universal mother is worshipped in her forms as Durga, Lakshmi and Saraswati. A Durga puja is performed every day to Her and every evening an Amman abhishekam is performed to Her. On the ninth day the ayuda puja is performed. Devotees and children walk through the Ashram blessing the buildings, tools, instruments and vehicles. On the tenth day, the victory of divine light over ignorance and negativity is celebrated with a Mahabhishekam to Bhuvaneshwari.

Deepavali
Deepavali means, ‘a row of lights’. On this day people celebrate the victory of the forces of light over darkness. The early morning bath on Deepavali is considered to be a bath in the holy river Ganga itself. It is a custom in India that all wear new clothes on Deepavali. Following this tradition clothes are donated and distributed to the children in the Ashram and also the labourers who work in the Ashram. On Deepavali people visit their families and friends and bring many different sweets as gifts. At dusk, inside and around the houses small oil lamps are lit to symbolise the victorious light.

Skanda Shashti
Skanda Shashthi is a 6-days festival which celebrates the giant battle between negative forces and the forces of light and dharma, represented by Lord Skanda and his Vel.

Ashram anniversary
Sri Premananda Ashram was inaugurated in 1989 on 18th November, the day after Swamiji’s birthday in the presence of many sadhus and other guests from all over Tamil Nadu. We celebrate this day as Founder’s Day and the Premananda High School presents an interesting programme with songs, dramas, competitions, etc. In the morning a new flag is hoisted in front of the prayer hall.

Ramzan
Ramzan marks the end of the fasting period of the Muslims. This festival is an occasion for us to become more familiar with Prophet Mohammed’s teaching of which the essence is oneness of God and the importance of charity and religious discipline.

Kartikai deepam
The locally famous ‘Muruga Rock’ is on our Ashram land. Kartikai Deepam is the festival that celebrates the victory of light over darkness. It reminds us to burn our impurities in the fire of knowledge of the Self. In the Ashram we light around 300 small clay oil lamps and distribute them along the Ashram roads and buildings. Then a procession goes to the Rock singing bhajans and carrying a bowl of fire to the top of the Rock. On this day we remember that we should attain illumination and behold the light of lights in the heart of every being.

Christmas
Every year on 25th December we celebrate Christmas in a very festive and peaceful manner. A beautifully decorated Christmas tree is arranged and a crib is set up in a natural surrounding with leaves, twigs, plants and beautiful figures of Jesus, Mary and Joseph. The nativity story is performed by the children and, as a multinational community we sing Christmas carols in different languages before Father Christmas pays his visit to the Ashram children and distributes small gift bags, sweets and fruit.