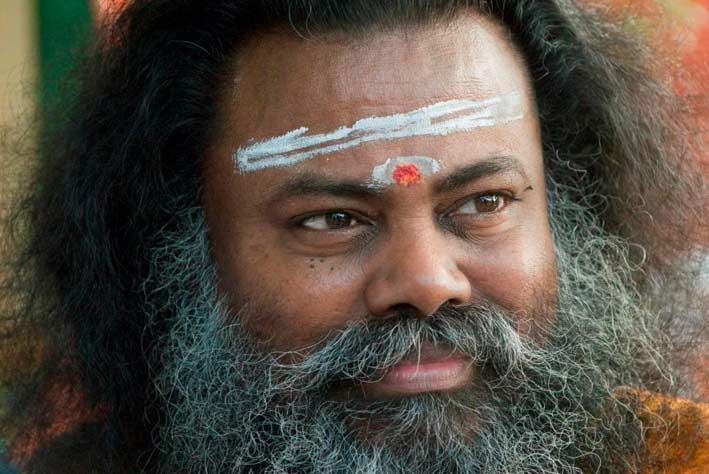 In 2010, I had just returned from India having received the three Centre statues from Swami.

Shortly after my return home someone had given me a picture of a young man, named Jules, who had been very badly injured in a car accident.  He was hospitalized and lay in a deep coma. The person who had given me the picture wanted me to do something for this young man and I thought to myself that I would place his picture on Swami’s cushion during one of our Centre programmes. I had been told that the medicine he was being treated with had not managed to lower the cerebral pressure and even cutting open his forehead had not helped to bring down the pressure!

When I held Jules’s picture in my hand I suddenly felt the urge to place it in the arms of the statue of the Divine Mother. It was something stronger than myself.  I placed his photo there. The following day one of his family members called me to say that the cerebral pressure had suddenly returned to normal and the doctors could not explain how this had happened.  Weeks passed and the young man’s condition remained ‘critically stable’.  One day, by invitation from the family, I found myself at the hospital on the ward where Jules was being cared for.  I was allowed to enter his room for a very short visit and was able to give him a lingam blessing. Jules was laying on the bed, attached to all kinds of medical instruments. The doctors’ prognosis was not good, according to them he would never be able to speak again, he would never walk again, in short, his life would be a completely vegetative one.  In the following days the family found a physical therapist who had a completely different vision.  He took things in hand and, against all the odds, had faith in the possibility of Jules’s recovery. Today Jules can walk and talk and, in fact, is living a perfectly normal life. Nothing of what the doctors had predicted came true and Jules regained the force of life. Later I remembered that when Swami had given us the statues he had said that a miracle would happen in the Centre with the statues that year and that we should tell him about it.

Paripurani, a regular member of our Centre, and I wanted to go and see an art exhibition.  At the same time we decided to take advantage of the situation to set up a stand selling articles to raise money for charity.  From the organizers we gained permission to give a brief talk about our charity on a particular evening. This would take place in the village hall and we would show a slideshow.  On the evening in question everyone in the village had settled themselves in the hall, waiting to be shown the pictures.  However, as I was getting everything ready I realized that the projector didn’t work.  I opened it up and discovered that there were no batteries! It was late in the evening, and the stores closed early in this little village… what was I to do? I turned to a lady who was standing nearby and asked her if we might use the batteries from her television’s remote control.  She agreed, but said that it would take her about 15 minutes just to get to her house.  She left in a hurry.  Meanwhile the people in the audience were getting impatient and some of them suggested that we should just go ahead without the slideshow. Chairs were squeaking and people were getting bored. But something told me to wait. At that very moment a speeding car suddenly stopped exactly in front of the door.  A man stepped out, walked straight toward me and asked, “You have a problem?”  “Yes”, I answered, “I want to project a slideshow but the projector has no batteries, where could I possible find some batteries at this hour?”   “Just come with me”, he said, and I followed him to his car. He opened the boot of his car and there I was amazed to see an abundant assortment of all different types of batteries! I couldn’t believe my eyes, there were all kinds of batteries, all types, sizes, in packages of multiples or singles… it was unbelievable.  Then he explained, “Yesterday I bought out the entire stock of a store that was closing and I haven’t yet had the time to empty the boot.”  An unbelievable… leela!