Guru Poornima around the world 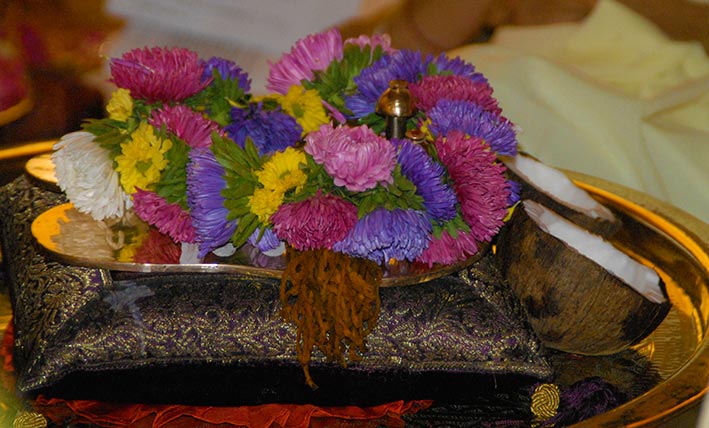 Typically on Guru Poornima we perform a pada puja, the worship of the feet of a saint or of his/her traditional sandals called padukas. It is understood in the Eastern spiritual tradition that the feet of the sage are to be venerated as symbols representing Divinity. We also present the Guru with a tray of traditional offerings containing fruits, some money, flowers and – particular to Guru Poornima – a set of clothes.

“When one performs a pada puja, one should surrender the ego at the feet of the spiritual master. You should, figuratively, lay your thoughts, feelings and problems and indeed your entire mind at his feet. You should regard the feet as a shrine and as the spring of all divine knowledge and wisdom.” – Swami Premananda

In the early morning on Guru Poornima in the Ashram we often perform a Dakshinamurti yagam (a yagam is a fire ceremony to ask a deity’s blessings or help, through the intervention of Agni, the Lord of Fire). During the yagam many different items are offered into the fire such as special herbs, ghee, seeds and fruits. It is said that Lord Shiva came to the earth as the first Guru in the form of Lord Dakshinamurti. Lord Dakshinamurti taught spirituality to his disciples, the Rishis, so that they could then spread this eternal, divine wisdom all over the world.